The lonely flight of the Holy Family is depicted visually by the exact layering of transparent colors and drawings, creating a myriad of fine details and rich colors. FLIGHT INTO EGYPT, a vertical-panorama, engages the viewer with the Holy Family’s escape to Egypt under a massive star filled sky and within a complex landscape, where many stories unfold and are realized in great detail.

Swanson envisioned the biblical story of the Holy Family in reference to current events, photos, and stories of people who must leave their homes. Whether fleeing wars or natural disasters, they are all refugees in makeshift towns who have to move to safer places in order to survive. He wanted to capture the urgent plight of a poor family protecting their newborn child from imminent danger, while fleeing to an unknown country.

God is protecting this Holy Family, but there are so many other holy families, who are unprotected. Angels rush to protect and guide Mary, Joseph and the baby Jesus. We need to be those angels, and support groups that help refugees, and act with compassion and strength.

Few people uproot themselves by choice … Some know where they are going, confident that a better life awaits them. Others are just fleeing, relieved to be alive. Many never make it.
-Sebastião Salgado, Migrations (Aperture, 2000)

For many years, I have been inspired by the story and events surrounding the birth and young life of Christ. I had always sketched small drawings and worked out ideas in my notebooks. These small works led to my Birth of Christ serigraph series:

In August of 2001, I began printing, FLIGHT INTO EGYPT, at Aurora Serigraphic Studios, finishing the artwork six months later, in January of 2002, after printing 47 colors.

In creating these works, I was inspired by stained glass window images from the cathedral at Chartres, where biblical stories unfold within beautiful window panels. The serigraphs are realized in the elongated shape of these window panels. These images were further inspired by Mexican Christmas traditions. Latin families create beautiful crèches (nacimiento) of many figures and animals, creating a whole environment, a miniature world and landscape around the Nativity figurines.

When I saw the television premier in 1951, at the young age of thirteen, I was moved by the beautiful story and the wonderful music of the opera, Amahl and the Night Visitors by Gian Carlo Menotti. The storyline helped me to find what I wanted to show in my visual concept of the Christmas story. Menotti’s delightful interpretation of the people who bring gifts, the three Magi (Caspar, Melchior, and Balthazar), and the importance of their journey all stayed with me over the many years. Since then, I have been able to see a number of performances over the years. I tried to bring the same humanistic and spiritual ideas into my Birth Narrative. 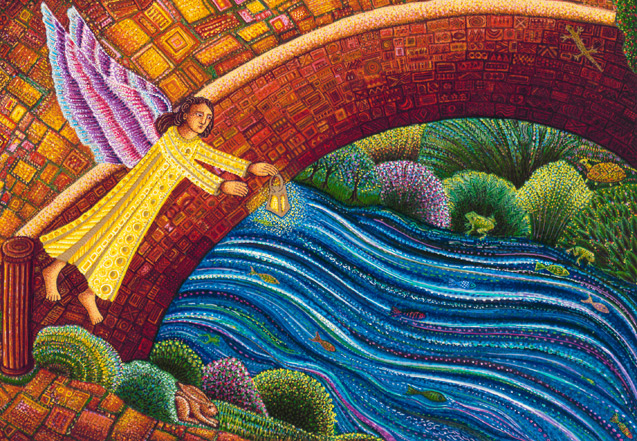